Yvette Torres, who spent 12 years as one of the FBI’s most wanted parental kidnapping fugitives, has been given a pass. 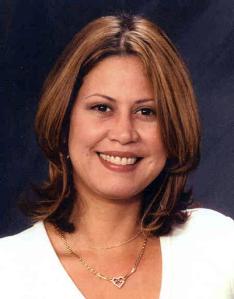 Yvette Torres was arrested in September at Kennedy Airport by FBI agents after she agreed to return from Spain with her now-14-year-old daughter, Sabrena.

The feds have given a free pass to a woman who was once one of the FBI’s most wanted parental kidnapping fugitives, the Daily News has learned.

Prosecutors have dismissed criminal charges against Yvette Torres, whose smiling face was a fixture for 12 years on the FBI’s website.

The author Alice Sebold even used a photo of Torres’ daughter Sabrena and other missing children to illustrate a special edition of her haunting novel “The Lovely Bones,” about a young girl who is kidnapped and murdered.

Torres, 49, was arrested in September at Kennedy Airport by FBI agents after she agreed to return from Spain with her now-14-year-old daughter. She was released on $75,000 bail and faced three years in prison. 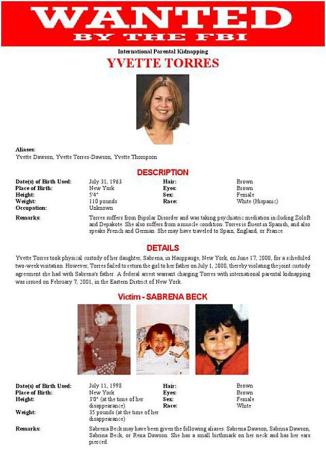 The child was turned over to her biological father, Davis Beck of Long Island — who had shared custody of the girl when Torres fled in 2000.

A spokesman for the U.S. attorney’s office said the decision to drop the charges was made in consultation with “all the parties.”

“In the interest of the child, this was the best course of action to take,” said spokesman Robert Nardoza.

A source familiar with the case said Torres’ voluntary surrender was a consideration in deciding the outcome of the case, but insisted she was offered no promises by authorities in advance of her arrest.

Torres suffers from bipolar disorder and other physical ailments, said another source.

“She’s a mess, which is one of the reasons she came back,” the source said.