Forty years after a Swedish hostage drama gave rise to the term “Stockholm Syndrome”, the phenomenon is still being used, and misused, to explain the reactions of kidnap victims.

But one man knows exactly how it works. Jan-Erik Olsson remembers clearly the strange things that happened after he walked into a bank in the Swedish capital on August 23, 1973, pulled out a submachine gun and took four employees hostage. 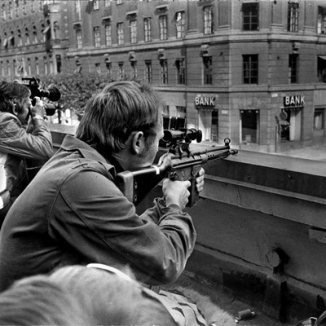 -Police snipers on August 24, 1973 on a roof opposite Kreditbanken bank where Jan-Erik Olsson was holding workers hostage. Forty years after a Swedish hostage drama gave rise to the term “Stockholm Syndrome”, the phenomenon is still being used, and misused, to explain the reactions of kidnap victims.

“The hostages more or less sided with me, protecting me in some situations so that the police wouldn’t shoot me,” said Olsson, then a convict on furlough from prison, and now a peaceful 72-year-old.

“They even went down to use the bathroom and the police wanted to keep them there, but they all came back,” he told AFP.

The five-day hostage crisis, the first to be broadcast live to a mesmerised Swedish nation, created even more drama after police agreed to Olsson’s demand to have one of the country’s most notorious criminals, bank robber Clark Olofsson, brought there from prison.

Olsson, much less of a celebrity at the time, had kicked off the drama with the memorable line, “The party has only started!”, and initially he had scared the hostages. 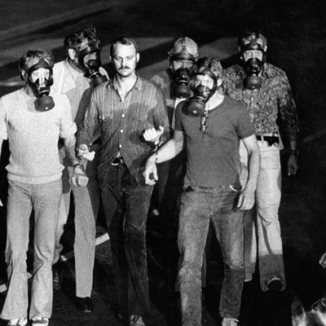 Picture taken during the siege at Kreditbanken in Stockholm that began on August 23, 1973. The five-day hostage crisis, the first to be broadcast live to a mesmerised Swedish nation, created even more drama after police agreed to Olsson’s demand to have one of the country’s most notorious criminals, bank robber Clark Olofsson, brought there from prison.

“You could see the fear in their eyes,” Olsson said. “I only wanted to scare them. I’ve never done time for anything particularly violent.”

After a while, however, the fear turned into other more complex feelings, as a shocked Swedish public learned from one of the first telephone interviews with hostage Kristin Enmark.

“I’m not the least bit afraid of Clark and the other guy, I’m afraid of the police. Do you understand? I trust them completely. Believe it or not, but we’ve had a really nice time here,” she said.

Olsson and Olofsson eventually surrendered, and all the hostages were rescued. But that was not the end of the story.

From then on, the roles of captor and captive have been seen in an entirely different light, and the “Stockholm Syndrome” still conveys expert status to Frank Ochberg, the American psychiatrist who coined the expression.

Ochberg, who testified during the recent trial of Ariel Castro, the 53-year-old Cleveland man who abducted and tormented three young women for a decade, said the Stockholm Syndrome has three elements.

First, there are “the parts that generate attachment and even love on the part of the hostage for the hostage holder,” he said.

The second part is the reverse — when the kidnapper reciprocates and begins to care about the victim.

“That’s the reason we sometimes want to generate the Stockholm Syndrome if we can, when we’re dealing with a hostage situation,” he said.

The third element is both parties’ mutual contempt for the outside world.

Typically, the event happens very suddenly and hostages are terrified to the point where they have a sense of knowing, not just thinking, they are going to die, according to Ochberg.

“Very early on, they are denied the ability to speak, to move, to use the toilet, to eat. And then they are given those gifts of life, and as they receive them they have the feelings… we have when we are infants and close to our mother,” he said.

Since it was first identified, experts have disagreed on just how common the Stockholm Syndrome is.

At first, there was a “pendulum swing” to always look for it, but after FBI negotiators questioned its prevalence, it “swung back to where I think it should be, somewhere in the middle,” Ochberg said.

The term has filtered into everyday language and is sometimes used incorrectly.

Austrian teenager Natascha Kampusch emerged in 2006 after being held captive for eight years in an underground bunker, where she was abused, starved and raped.

But she admitted crying when hearing about the death of her tormentor, and has said she has “grown apart” from her parents, leading to speculation that she might be suffering from Stockholm Syndrome.

“Once a person is set free, they may feel closer to their captor than to those who were prior friends and family. I wouldn’t call this Stockholm Syndrome,” Ochberg said.

As for Olsson, the ex-bank robber has stuck to the straight and narrow since leaving prison in 1980, working as a car salesman in Sweden and as a farmer in Thailand, where he lived for 15 years with a Thai woman he married 24 years ago.

“I don’t think I would like to have (the robbery) undone because it’s been a large part of my life and a lot of things have happened afterwards,” he said, but added that he did regret all the years of his life he spent in prison — even though two of his hostages came to visit him there.

Asked if he thought the condition really did exist, he said: “What the heck is a syndrome anyway? I don’t know.”