Mother’s agony as ex-husband is jailed for kidnapping their daughter and taking her to Libya – but she STILL can’t get her back. 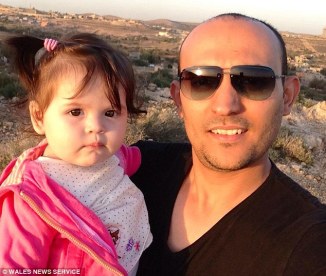 A mother has made an emotional appeal to her husband’s family to return her young daughter, who was taken to Libya in a ‘tug-of-love’ battle between the parents.

Mal Szymanowicz’s daughter Talia was snatched by Maher Belaid – Ms Szymanowicz’s estranged husband – in 2012 and taken to his home country in North Africa.

Belaid was jailed for Talia’s kidnap last year after returning to Britain without his little daughter, who remains in Libya with his family and now calls her paternal grandmother ‘mum’.

Belaid has refused to comply with a court order to bring the little girl back to the UK to see Ms Szymanowicz, who has now been separated from the youngster for more than two years.

Mal Szymanowicz has made an emotional plea for the return of her daughter, who was snatched by Ms Szymanowicz’s estranged husband Maher Belaid (pictured, right, at their wedding)

Ms Szymanowicz has now made a desperate plea for help in having her daughter returned to her home in Barry, south Wales.

She said: ‘My heart is broken, I can’t even put my pain into words. I wonder if I will ever see my beautiful daughter again.

‘I cry every single day for her. She was only-15-weeks old when she was stolen, now she is two. Its so long since I held her in my arms, they feel so empty.

‘What Belaid has done is beyond cruel. He has deprived Talia of a mother and me of my only child. It’s a physical pain that never goes away.’

‘It’s like being in a never-ending nightmare – there must be someone out there who can help me get my baby girl back.’

Ms Szymanowicz came to Britain from Poland in 2002 and met Libyan national Belaid, who working in a pizza takeaway, and they got married and had a child together.

Their marriage – the only thing which allowed Belaid to stay in the UK – broke down soon after Talia was born when Belaid spent three weeks in Libya with his family.

Ms Szymanowicz was shopping in Mothercare when her then-15-week-old daughter was taken by Belaid.