This is not the first time a man with ties to Louisiana is suspected of abducting his two young sons. Last year, the boys’ biological father reportedly kidnapped them at gunpoint from foster care in Louisiana.

Today, authorities in Louisiana and several other states continue to search for Joshua Michael Hakken, a 35-year-old with ties to the Slidell area who is suspected of taking his 4- and 2-year-old sons from their maternal grandparents’ home in Florida after tying up their grandmother.

“It’s the manner in which the kids were taken that concerns law enforcement,” FBI Special Agent Dave Couvertier said during a news conference today. 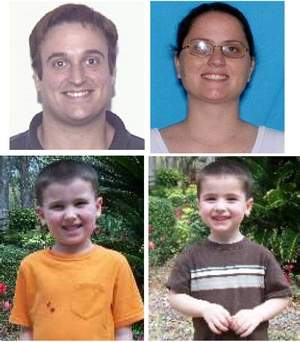 Hakken, 35, entered his mother-in-law’s house north of Tampa, tied her up and fled with the children, authorities say. Hakken, the boys and the boys’ mother might be traveling in a black 2006 GMC pickup bearing University of Florida license plate U95KT.

Tips about 4-year-old Cole Hakken and 2-year-old Chase Hakken have poured in from several states, an FBI agent and a Hillsborough County, Fla., sheriff’s spokesman said during a news conference.

Officials say Hakken and 34-year-old Sharyn Patricia Hakken are the prime suspects in the abduction. “Both suspects are anti-government and have attempted a previous abduction at gunpoint in Louisiana,” an earlier news release says. Authorities are focused on the children and not the parents’ political views, Couvertier said. “We’re working on the safe return of the entire family, specifically the children. We don’t anticipate or expect them to hurt their children. And, hopefully, we can put the family back together.”

The Hillsborough sheriff’s office has issued an arrest warrant for Joshua Hakken. He faces two counts each of kidnapping, child neglect and false imprisonment and one count each of burglary with a battery and grand theft auto.

Joshua Hakken lost custody of his sons last year after his arrest on a drug possession charge, authorities say. He later tried to take them at gunpoint from a foster home in Louisiana, they added.

The two boys have been living with their maternal grandparents since last year, officials said. A Louisiana court informed the Hakkens on Tuesday that they’d been stripped of their parental rights. This morning, the Tennessee Bureau of Investigation issued a statewide alert after the family’s vehicle was believed to have been seen about 8 p.m. Wednesday in Etowah in southeast Tennessee.