PHUKET: The mother wanted for abducting her two British-Thai daughters from their natural father in Pattaya is believed to be heading to Phuket. 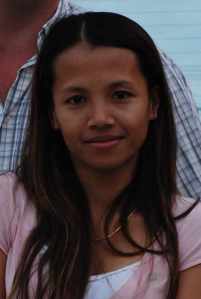 On Tuesday, Pattaya Police were issued an arrest warrant for 36-year-old Onwarat Gamlem, who is the non-custodial mother of the children. The warrant orders police officers around the country to arrest Ms Onwarat on charges of child abduction.

Ms Onwarat, also known by her nicknames “Nok Lek” and “On”, is to be handed over to the Pattaya City Police once arrested.

“She met her current husband there, too,” Ms Dillow said.

Ms Onwarat and Mr Day are divorced. A Thai court four years ago gave full custody of the girls, Annie and Aleena, to Mr Day, with no access to Ms Onwarat, reported Pattaya103.com (story here), which broke the story.

Ms Onwarat deserted the children for 18 months when they were very young, said the report.

Mr Day took the children to the UK and has been raising them alone, but allowing them to communicate with their mother online.

At the end of May, he brought the girls, aged six and 10, to Thailand to see their mother. He allowed Ms Onwarat to take them for several days.

When Ms Onwarat did not return them on June 1 as agreed, Mr Day contacted the police, who searched her home and found it empty.

Ms Onwarat is now married to a Norwegian man who left Thailand for work on April 27. The couple have a three-year-old son, Marvin.

Also known by her previous married name Wiganda Day and her maiden name Onwarat Suphikunphong, Ms Onwarat is believed to be in hiding with her three children.

The Gazette notes that the registered address on the arrest warrant marks a residence in Pathum Thani, on the outskirts of Bangkok.

Alternatively, Ms Onwarat may be hiding out in her home province of Ayutthaya, Ms Dillow noted.

Anyone with information about the group’s whereabouts are urged to notify nearest police station or call the police hotline 191.

THE four girls at the centre of an international custody dispute will be released from foster care to live with their mother pending a High Court hearing in August.

In emotional scenes in the Family Court this afternoon, Justice Peter Murphy ruled the girls be placed in their mother’s care after considering submissions, including that at least one of the sisters had made comments about self harming while in state care.

He said although he was reluctant to make the order, “on balance” returning the sisters to their mother was the better option, citing concerns for their welfare.

He added that it was not the purpose of the hearing to determine whether the mother had a role in the girls’ disappearance in May, when they breached a court order ordering that they return to Italy.

The Department of Communities had opposed the mother’s application, arguing that remaining in foster care was “the lesser of two evils” in the circumstances. The girls’s father had also argued against the release arguing the mother would further “alienate” his daughters from him.

The conditions of the release from foster care are being determined now.

The girls’ mother applied to have the children, aged 9 to 14, released from foster care pending High Court proceedings in August.

Earlier, a teenager at the centre of an international custody dispute has penned an emotional plea, begging to be allowed to live with her mother in Australia. The letter was read out in the Family Court in Brisbane on Friday, where the mother is attempting to regain custody of her four daughters, who are in foster care. It was written by the eldest girl.

“If you ask me there is nothing in the whole world I want more than just to be home with my mum and back at school with my friends again,” the teenager wrote, adding that she wished for “a miracle from God” that it could happen.

The girls have been trying to avoid a Family Court order to return to Italy with their father.

They are not attending school while they await the High Court challenge in August.

She urged the judge to consider “the reality of the children’s situation” and return them to their mother.

But the Department of Communities said there was a risk the children could go back into hiding if they were placed in the care of their mother.

Earlier this year they hid for more than a week before police found them on the Sunshine Coast.

Barrister James Linklater-Steele said the mother was also poisoning the children’s relationship with their father.

The relationship between he and the girls had improved since they were placed in foster care, he said.

He argued that to return them to the “uncontrolled environment” of their mother’s care would “severely risk the advances that have been made to date”.

Earlier, the Family Court justice dismissed an application to have the girls’ great-aunt appointed legal guardian, noting the sisters had “a voice” in the submissions before him.

However, he ruled the great-aunt, as a potential carer – should the application to have them released prove successful – had the right to be legally represented as an individual at the hearing.

This morning the girls’ mother applied to have the children, aged 9 to 14, released from foster care pending High Court proceedings in August.