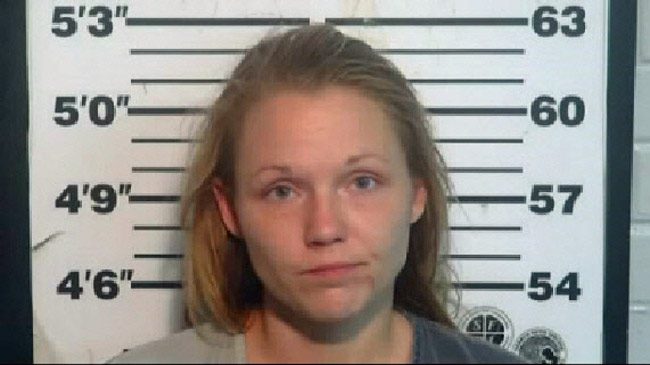 The call came in to the Flagler County Sheriff’s Office at 8:21 Saturday morning from 9 Cute Court in Palm Coast.

Two children, ages 3 and 5, had been at the house, in their great-grandparents’ custody. They’d been put to bed the previous night. Somehow, sometime in the night, their mother, Sara Elisabeth Jones, managed to get in the house and take them–or kidnap them, according to the charges she faces. She then drove to Tennessee.

The children’s legal guardians are James and Billie Dean Jones. Kristi Kocer, the children’s grandmother, told authorities that clothing, toiletries and toys belonging to the children were also missing. The children’s parents immediately believed Jones had taken the children–either to a house on County Road 304, where she’d lived before (she was not there when deputies checked), or to their father’s, Philip McGraw, who lives in Tennessee. The Joneses believed McGraw had given Jones access to a vehicle.

Joyce Jones, the mother of Sara Jones, speaking to FlaglerLive by phone from Tennessee on Tuesday, said Sara Jones and McGraw had taken the children together and driven to Tennessee. “The father came and took the children, she went with him,” Joyce Jones said.

Sara Jones was not supposed to drive: she had lost custody of the children, according to the Sheriff’s Office’s dispatch notes, because she’d been in a crash, with the children in the vehicle, and had tested positive for various drugs–methamphetamine, cocaine, and marijuana. The children had been in the backseat. (Joyce Jones said only one child was in the car at the time of the crash.)

The children’s disappearance wasn’t entirely a surprise: Jones two days earlier had told their guardians she would be coming for them, according to what they told the 911 dispatcher–and the guardians had met with Jones and a behavioral specialist at the C-Section home the night before. It was a family counseling session. But beyond that, Jones did not have permission to be in the house, let alone take the children from the house. Still, she had a key to the house.

By noon Saturday the Sheriff’s Office learned that the children had been dropped off somewhere in Tennessee. Locating the mother’s phone through pinging and GPS proved unsuccessful.

As detectives investigated, James Jones got a call from McGraw’s former boss: he had called McGraw and heard children’s voices in the background, leading him to believe those were the missing children. By 2:30 p.m. Saturday, authorities had contacted the Monroe County Sheriff’s Office in Tennessee, and within hours Jones was arrested on kidnapping charges and the children were placed in the custody of Tennessee’s Department of Children and Families. The children had been located with their paternal grandmother at a house on Reed Springs Road in Sweetwater, in the eastern part of the state.

Joyce Jones disputed that account. She said she had called the paternal grandmother and urged her to tell the children’s parents to “do the right thing.” But she defended Philip McGraw, saying he had 50-50 custody of the children, according to a Tennessee judge’s order, even though the same order did not apply in Florida, and that he’d fulfilled numerous requirements of family court to regain custody. “What you’ve got here is you have two different states, two different problems,” Joyce Jones said, blaming Florida’s Department of Children and Families for not being current with the case, and blaming the the Sheriff’s Office and the media for publicizing the story of the arrest–and getting facts wrong, in her view.

Joyce Jones at one point contacted the Flagler County Sheriff’s Office–on whose facts the central accounts of this story were based–and asked the office to contact FlaglerLive to demand that the story be altered. She was told otherwise. “Our facts are what your facts are,” the Sheriff’s Chief Mark Strobridge said Wednesday, referring to FlaglerLive and the agency’s original account of the incident, which appeared on the agency’s Facebook page. “That’s what the court system is for, they’ll be able to bring their facts through their attorneys through the courtroom.”

(On Tuesday, McGraw posted a reaction to this story on FlaglerLive’s Facebook page that disputed the sheriff’s account, saying he was the one who told authorities the children were at his mother’s house. “My children were safe and sound with their cousins when authorities showed up they didn’t want to take the kids away but Florida gave them no choice,” he wrote. “Smh shame on Florida for saying they were in harm’s way me nor Sarah Jones would never hurt our children.. I’ve been waiting three months for Florida to send dcs to my house for home study. None of the paper work I have faxed has been documented. But yet here they are trying to make it out that we are horrible parents.”)

“I’m thankful these children are safe and out of harms way,” Sheriff Rick Staly was quoted as saying in a release. “Our detectives worked quickly with DCF and Tennessee authorities to find these children and track down the mother. You cannot interfere in custody issues ordered by a judge without risk of being arrested. These orders are done to protect children when their parents don’t and are not taken lightly. Parental abduction is against the law in Florida.” (Parental kidnapping of a child in violation of legal custody decisions is a felony in most, but not all, states.)

The Sheriff’s Office is working with Tennessee authorities to extradite Sara Jones back to Flagler County. That usually means deputies from Flagler must travel to Tennessee to bring Jones back, at taxpayer expense, though the sheriff has been adding the cost of such extraditions to a defendant’s bill when it is drawn up in court.

The children, according to Joyce Jones, were flown back to Florida with a Tennessee case worker.