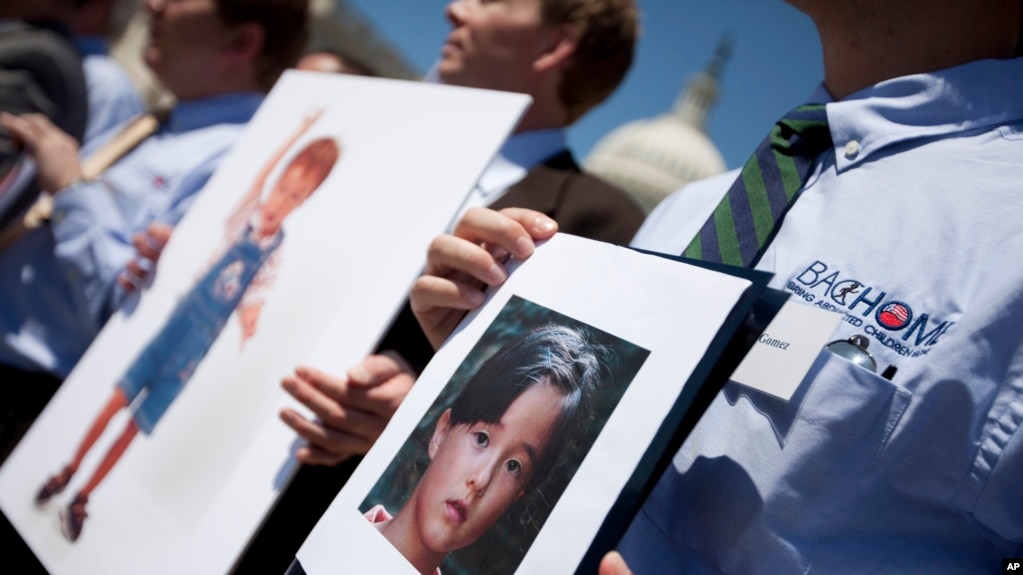 FILE – Fathers who lost their children to spousal abduction to Japan hold photos of their children during a news conference on Capitol Hill in Washington, May 5, 2010 In 2013, Japan’s parliament approved joining the 1980 Hague Convention on international child abduction, a global child custody treaty, amid foreign concerns that Japanese mothers can take children away from foreign fathers without recourse.

Fighting back tears before a Senate panel, American physician Chris Brann on Tuesday recounted the abduction of his son, Nicholas, who was taken to Brazil in 2012.

“This is best described as a living death,” Brann said in a halting, emotion-laden voice. “He [Nicholas] was 3 years old when he was unilaterally ripped out of my life, moved to a country he had never lived in, to a language he didn’t speak, to a culture he didn’t understand.”

Brann added, “I’ve never been allowed to be there for his birthday, to be there for Christmas. You can’t know what that feels like until you’ve been in that situation. As a father, there are times I feel like a failure because I wasn’t able to protect my boy.”

Nicholas was taken by his Brazilian-born mother, Brann’s ex-wife. The case is not unique. Hundreds of international child abductions by parents are reported in the United States each year.

According to State Department officials, the return rate hovers at about 45 percent. U.S. lawmakers of both parties say America can and must do a better job recovering its youngest citizens and preventing such abductions in the first place. 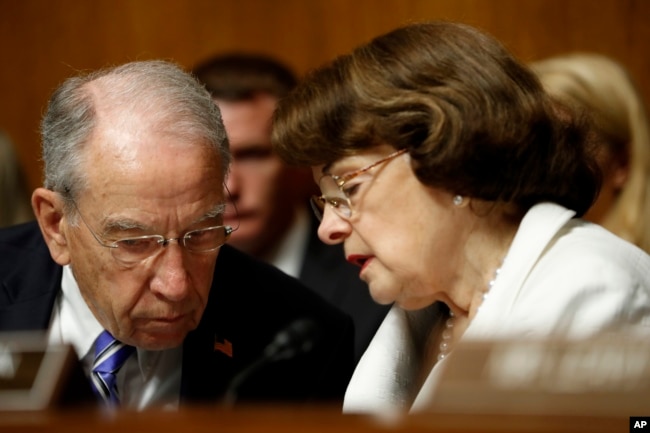 “There’s more Congress and the executive branch can do to end the kidnapping of these children,” Senate Judiciary Committee Chairman Chuck Grassley, an Iowa Republican, said.

The United States is one of 82 signatories to the 1980 Hague Convention to combat international child abduction, which commits nations to expeditiously return minors illegally taken abroad by a parent.

U.S. law also speaks to the issue. The 1993 International Parental Kidnapping Crime Act established federal penalties for a parent who removes a child from the United States in violation of another parent’s custodial rights.

Testifying before the Judiciary Committee, Assistant Secretary of State for Consular Affairs Carl Risch admitted the department has used the 2014 law’s provisions sparingly, issuing diplomatic protests rather than imposing stronger measures on nations that do not assist in the return of abducted U.S. children.

Brann disagreed, noting that nothing the State Department has done so far has convinced Brazil’s judiciary to reunite him with his son. Brann compared the State Department’s reluctance to sternly punish uncooperative countries to a doctor who refuses to use the strongest medical tools to treat an illness.

“When the State Department says we are going to continue to engage diplomatically, what they are saying is that they are just going to pat me on the shoulder and say, ‘We’re so sorry that has happened,’ ” he said.

Another witness testified to the power of heightened pressure on foreign countries. In 2011, Kentucky resident Noelle Hunter’s ex-husband took their 5-year-old daughter, Muna, to Mali. The Senate’s Republican leader, Mitch McConnell, spearheaded a sustained effort by Kentucky’s congressional delegation to compel Malian officials to return Muna. The campaign succeeded and Hunter brought her daughter back to America in 2014. 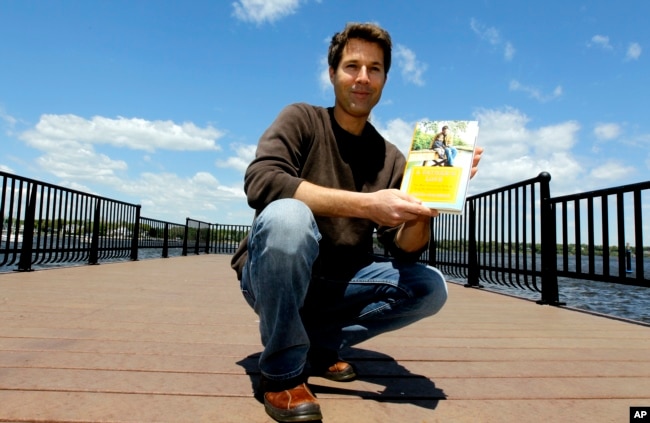 FILE – David Goldman poses with his book “A Father’s Love” in Red Bank, N.J., May 5, 2011. Goldman became the poster dad for the issue of international child abductions when his ex-wife ran off with his son, Sean, to Brazil. He finally got custody of his son in 2009.

“If every member of Congress with kidnapped constituents would begin to regularly inquire of federal agencies and the [foreign] nations in which they are held, these children are going to come home,” Hunter said.

The committee’s top Democrat, Dianne Feinstein, applauded the concept of increased activism by lawmakers, but noted that her state, California, has hundreds of parents with a child missing abroad and only two senators representing all of them.

“How do you do 300 cases [in California] like your state was able to do for you?” Feinstein asked, adding that an intervention by members of Congress is “possible to do, but it’s not possible to do it every day of the year.”

Rather, Feinstein said, the solution is to “increase the clout of the State Department and others to move more personally on this [issue].”

Federal officials stressed that preventing abduction is the best outcome, adding that a program is in place to mobilize U.S. Customs and Border Protection agents when a child at risk of international abduction is identified.

“We can enter lookouts in our system if there are any attempts to travel [depart the United States],” said Don Conroy, who directs the agency’s National Targeting Center. “Returning the child is sometimes very complex. Prevention is a key piece of this.”

Lawmakers of both parties stressed they want to see more done.

“I’ve seen the extremes we go to to recover people who have been held hostage and the like, but we’re not doing that for children,” New Jersey Democratic Senator Cory Booker said.