A Virginia businessman has been found guilty of international parental kidnapping after getting involved in a Vermont same-sex couple’s child custody fight. 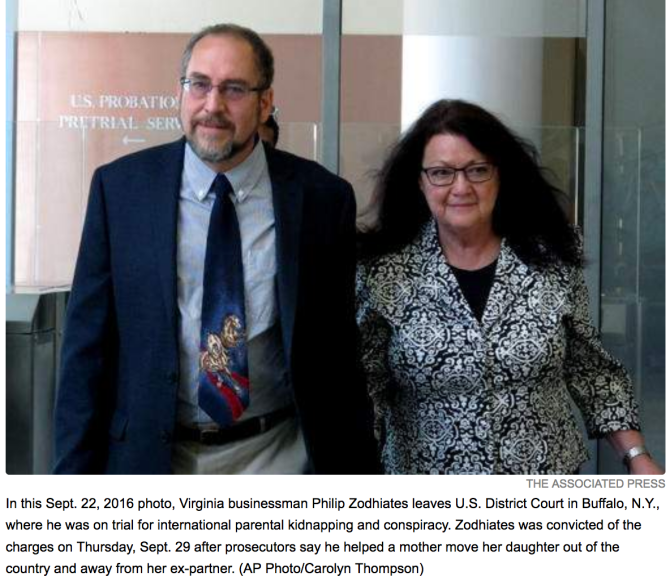 A Virginia businessman was convicted Thursday of international parental kidnapping and conspiracy for helping a mother take her daughter out of the country to avoid losing custody to her former partner.

A federal jury in Buffalo returned the verdict against Philip Zodhiates, of Waynesboro, on Thursday after hearing during a weeklong trial how he had driven Lisa Miller and 7-year-old Isabella Miller-Jenkins from Virginia to the Canadian border in 2009 so they could fly from Toronto to Nicaragua, and had helped with their living arrangements in the Central American nation.

Neither Miller nor Isabella, now 14, have been seen in the United States since.

Lawyers for Zodhiates, the owner of a direct mail business that serves conservative Christian groups, denied that he was trying to obstruct the other mother’s parental rights by helping Miller, who became an evangelical Christian after dissolving her civil union with Janet Jenkins in Vermont.

Zodhiates, the prosecutor said, enlisted the help of a number of Mennonites in the United States and Nicaragua in arranging Miller’s trip and a place to stay.

Miller also is charged with international parental kidnapping and conspiracy and is considered a fugitive.

A fourth defendant, Kenneth Miller, a Mennonite pastor, was convicted of international parental kidnapping in Vermont in 2012.

None of the Millers are related.

Zodhiates faces up to eight years in prison when he is sentenced Jan. 30.