Canada’s ability to help its citizens in trouble abroad is usually limited. Witness the high-profile example of journalist Mohamed Fahmy, jailed in Egypt (and released only last year), or that of teacher Neil Bantleman, still imprisoned in Indonesia. 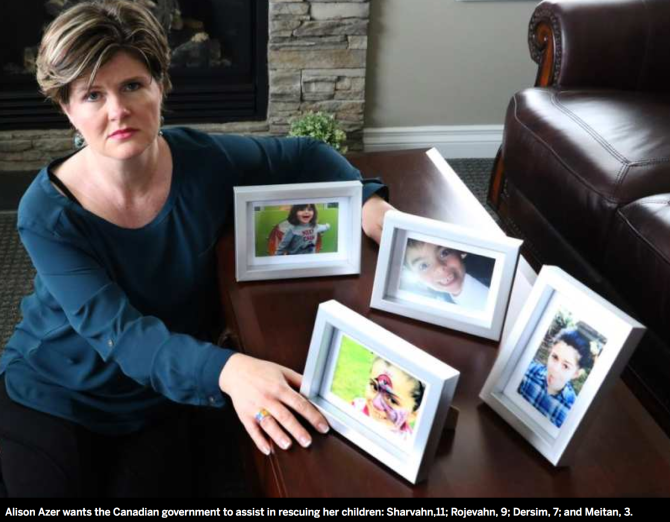 But the case of four Canadian children kidnapped by their father and spirited off to the Kurdish north of Iraq is different: The federal government has the muscle to act.

This harrowing story, reported by the Citizen’s David Pugliese on the weekend, involves the four young children of Canadians Alison and Saren Azer. Saren Azer, a doctor with Kurdish roots, originally from Iran, had been granted limited travel rights with his children after the couple divorced (the court made Alison, not him, their primary caregiver). But while on a court-approved trip to Europe, Azer abruptly whisked his children off to Iraqi Kurdistan, where he had a reputation for humanitarian work. When Alison came after him – travelling at great personal danger deep into Kurdish territory to appeal for the return of her children – local leaders turned her away. She believes the children’s location is well-known, but that Azer’s aid work prompted the community to protect him and rebuff her.

Separated from their mother now for more than six months, the children are victims of a parental kidnapping.

Canada can fix this. The federal government has just committed to more “lethal aid” and to tripling its military trainers in the fight against ISIL; most of these trainers will work with the Kurds. This gives the government unusual diplomatic heft, which it can use to retrieve the children. Kurdish leaders who want Canada’s military help should be told to respect Canada’s courts. Bring the children back.