Ashley Ann Olsen, an artist who had moved from Florida, was found dead in mysterious circumstances with her neck bruised and scratched.

Italian police are investigating the murder of a popular American expat found strangled to death in her flat near the river Arno.

Ashley Ann Olsen, 35, originally of South Haven, Florida, was found naked with bruises and scratches on her neck in her flat Saturday afternoon.

The news sent tremors through the tight-knit expat community of foreigners in Florence, as well as the vibrant, artistic Oltrarno neighborhood where she lived, along the left bank of the river that bisects the city.

On Sunday, many passerby stopped to leave bouquets of fresh flowers on her doorstep. “La Americana, la Americana,” said regulars at the café and tobacco shop on the corner.

“Everybody around here knew who she was . . the blonde American with the little dog,” said one young Italian woman who was walking her two small dogs down Olsen’s street in the Santo Spirito quarter.

Her body was discovered after her boyfriend, an up and coming contemporary Italian painter, said he became alarmed after being unable to reach her for several days. The two had fought, he said, but when she did not pick up his calls he contacted the landlord, who allowed him into Miss Olsen’s locked flat, where he found her and then called police, according to Italian media reports.

Police said she had bruises and scratches that suggested she tried to fight off her aggressor, but noted no signs of a forced entry into the small apartment on Via Santa Monaca. Her pet beagle, “Scout,” was found outside.

Miss Olsen moved to Florence in 2012 to study art and be near her father, who also lives in Florence, where he teaches art at an American school. Bubbly, popular and wealthy, the American appeared to be living a glamorous, bohemian expat life, which she chronicled regularly on Facebook and Instagram in enthusiastic bursts of short, hashtagged phrases. 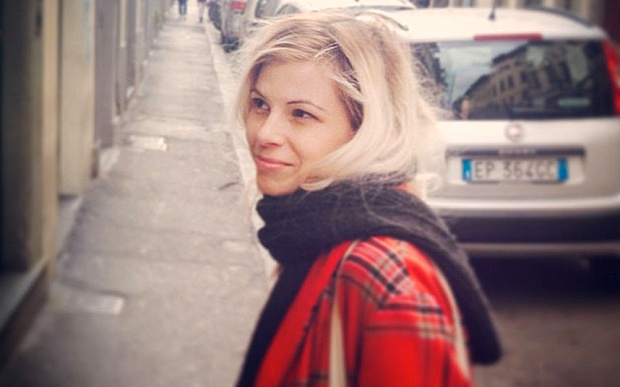 She posted pictures of her favorite haunts – the narrow cobblestone streets around her flat, the nearby square, her boyfriend’s art studio, the chic wine bars where she hung out. She garnered dozens of “likes” for the pretty snaps of her with her beloved beagle or enjoying road trips, from the backstreets of Berlin to balmy Mediterranean isles.

But it remains a mystery who made that choice for her. Police were questioning a large group of American friends about her last movements as well as her boyfriend, a 45-year-old Italian who had lived for years in California before resettling in Tuscany and building a budding career in contemporary art that led to exhibitions in New York, Berlin, Asia and Europe. She posted many pictures of them as a couple, often partying, and sometimes with affectionate comments like #thisguy is #somethingelse.

But one woman, a regular at Miss Olsen’s neighborhood café’ who was in frequent contact with her, told the Telegraph she had recently confided there were problems in the relationship. “I talked to her nearly every day, I felt like a mother figure to her,” said the woman, who asked not to be named.

“She had been in a previous marriage that ended badly, and still had her ex-husband’s name tattooed on the inside of her wrist. I encouraged her to get therapy, to not repeat the situation.”

Miss Olsen also hinted that her social media postings had attracted unwanted attention from strangers. Nine weeks ago she shared on Instagram several pictures that she suggested had been taken of her in her neighborhood without her consent. She attached the hashtags #Ihaveastalker, #creeperpic and #stalkeralert.

Investigators were studying her computer and phone records as well as CCTV images from the well-trafficked intersection near her flat for clues. “The investigation is active and ongoing, so we are not making any official declarations at this time,” said Florence police spokeswoman Maddalena Carosi, who said no suspects had yet been named.

The investigator in charge of the Florence Flying Squad is no stranger to high profile murder cases involving foreigners, having led the investigation into British exchange student Meredith Kercher’s murder in Perugia in 2007. As head of the Perugia Flying Squad at the time, Giacinto Profazio was present at Amanda Knox’s interrogation and had testified that the American from Seattle did cartwheels and the splits in the police station while waiting to be questioned about Miss Kercher’s murder.

Miss Knox, who Italy’s Supreme Court last year acquitted of murder, maintained she was just doing yoga to relieve stress. Mr. Profazio was later transfered to Rome, then appointed in early 2015 to lead Florence Flying Squad, where he now is among the lead investigators probing Olsen’s murder.