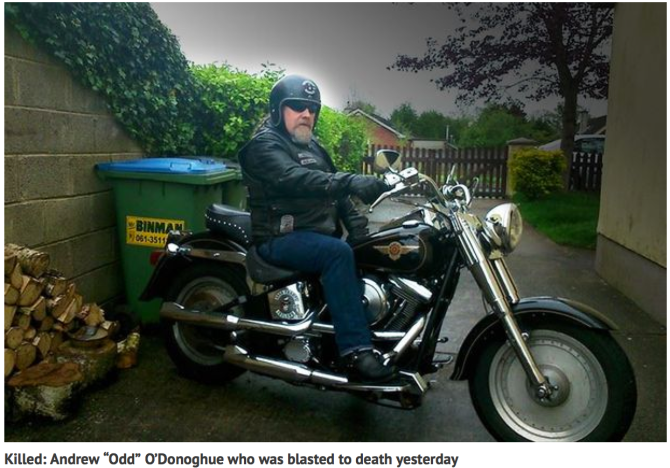 A feared international biker gang was behind the brutal shooting of an innocent man, we can reveal.

Members of a criminal gang called the Cabelleros are the main suspects behind the gun murder of father Andrew “Odd” O’Donoghue in Murroe, Limerick, on Saturday afternoon.

Mr O’Donoghue, who was a member of the Road Tramps Motorcycle Club, was blasted in the face with a shotgun as he relaxed with friends outside his own clubhouse.

Pals of Odd told of their horror at how he was callously murdered in broad daylight. A lifelong friend said: “He was so proud of his daughter Eva who was born in New York.

“They lived there for 10 years. He was a lovely man who loved the biker life.

“He was also a very good driver who would have given Joey Dunlop a good race.”

Gardai have arrested three men in relation to the vicious murder.

They were being quizzed at Henry Street and Roxboro Road Garda stations where they can be held until next Sunday.

But we can reveal the Caballeros have links to the feared Bandidos biker gang, who are known around the world as a criminal enterprise.

Sources told the Irish Mirror Mr O’Donoghue was in the wrong place at the wrong time when he was murdered.

The security source said: “What I’ve been told is that Odd was going down to the gates to feed the cats that would be hanging around the clubhouse. A number of bikes drove up and one shot at him with a shotgun and then he was gone.

“The Caballeros are a support club for the Bandidos who are trying to get a foothold in Ireland.

“The Bandidos are all over the world. They are violent killers, drug pushers and basically they’re just scum.

“One avenue of investigation for gardai is that the Caballeros carried out the hit on behalf of the Bandidos to send a message to Irish biker gangs that they are about to come over.”

Fr Tom Ryan who was a close friend of the murdered dad yesterday described him as a man of peace.

He said: “I looked upon Andrew as a good friend. I really can’t accept why this happened and why it happened to him. He led a peaceful life.

“I heard yesterday on the 6pm news. I knew Andrew very well. He was quite an inoffensive man, he was a good friend of mine.

“He lived in the village and he had a serious interest in motorbikes.

“I’m quite shocked to hear this has happened.” said Fr Ryan.