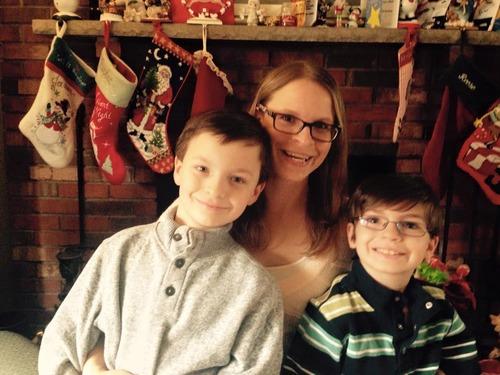 Sandra Hughes Dohm posed at Christmastime with her sons Parker and Jaxon, believed to have been kidnapped by their father. Photo by Facebook.

A New Jersey mother of two, Sandra Hughes Dohm, has taken to YouTube and social media in a heartbreaking effort to find her sons, ages 7 and 8, following their alleged abduction by their father five weeks ago.

“Kris, you need to bring them back home. You should not have taken them from me,” Hughes Dohm, of Hoptacong, says in a video plea to ex-husband Kristopher Dohm, posted to YouTube on March 14. The parents have been divorced since 2012 and have had a shared custody arrangement of one week on, one week off with Jaxon, 7, and Parker, 8, for the past five years. But now, she says in the video, “He violated our legal agreement on February 6 by abducting them.”

“I will never stop looking for you,” Hughes Dohm has said to her missing sons in a YouTube plea for their return. Photo by Facebook.

The plea is just the latest piece of an all-out effort — already involving local, county, and federal law-enforcement agencies — to find Jaxon and Parker, who had been staying with their father for a week before disappearing. Officials say that Kristopher, who is a diabetic, had asked the boys’ mother for a few extra days in order for them to all go and visit his dying father in Nevada. But a Sussex County prosecutor says that was a lie — the grandfather was neither sick nor dying — and that it’s believed that Kristopher left the state during the first week of February, when his grey 2009 Nissan Pathfinder was seen heading south in a tunnel in Baltimore, Maryland.

“We believe based on recent information regarding their father’s medical condition and him being insulin-dependent that he may not be making great decisions… we believe their safety may be at risk,” Sussex County Chief of Detectives Thomas McCormick said at a Mar. 9 press conference. “I believe this was his plan to put into action to have sole custody of the children.” There is currently a federal warrant out for Dohm’s arrest for unlawful flight to avoid prosecution.

Police are searching for Kristopher Dohm, believed to have kidnapped his sons Parker and Jaxon. Photo by Facebook.

According to the website of the National Center for Missing & Exploited Children, more than 200,000 children are abducted by family members each year, and family abduction— also referred to as custodial interference, custody deprivation, child stealing, and parental kidnapping — is recognized as a crime in every state.

Parents most commonly abduct their own kids for the following reasons, according to the national Polly Klaas Foundation for missing children: to force a reconciliation with the other parent, to spite or punish the other parent, as a reaction to fear of losing parenting rights, and, in rare cases, to protect children from a parent who is believed to be abusive. Warning signs that a parent plans a kidnapping, the site notes, include recent threats by the parent to do so, the parent’s feeling that he or she is alienated from the legal system, and the parent being sociopathic or jobless and not tied down in any way.

“Sometimes a parent is alternately obsessed with both reconciliation and revenge,” Dr. Richard Warshak, a Texas-based psychologist with expertise in divorce and custody battles, tells Yahoo Parenting. In such abduction cases, the anger “consumes” the abductor to the point of his or her not considering the negative impact that such a move could have on the children. “The process is very similar to what goes on when one parent poisons a child psychologically about the other,” Warshak, the author of “Divorce Poison,” says. “They’re so focused on their own view of the ex-spouse that they assume the children share, or should share, that same view.” In Hughes Dohm’s case, he adds, because there’s always a chance her sons will see the YouTube plea, “I think it was wise what she said in the video [about loving the boys], because oftentimes in these cases, the children are told that the other parent doesn’t care about them.”

Parker and Jaxon Dohm last spoke to their mother on Feb. 5. Photo by Facebook.

Hughes Dohm did not respond to a request for comment from Yahoo Parenting. However, during the recent press conference, she said, “There was no indication he would do this,” and that “the boys had a good relationship with their dad.” In posts on her dedicated Facebook page, Help Find Parker and Jaxon Dohm, the distraught mother has described both her boys as big fans of music, Taco Bell, McDonalds, and 7-Eleven Slurpees. “I just don’t understand how in 2015 in the United States of America a man can vanish with 2 children and not leave a trace,” she writes. “Someone has to have seen them.” Their father, she notes, “may call Parker by Park, Parker Choo, Chewy or Moose. He may call Jaxon by Jax, Action or Action Jaxon.” Parker also suffers from asthma, increasing his mom’s worry of a medical situation.

She also speaks directly to her boys: “Parker and Jaxon, I love you dearly. If you can pick up a phone and call me or call the police or tell somebody, ask for help. I’m looking for you every day, every night, we all are. I love you and I will never ever stop looking for you. Please come home soon and safe. I love you with all my heart.”