A former soldier nicknamed Rambo has been arrested after leading a team of highly trained mercenaries across exotic locations in a plot to kill a US drug enforcement agent. 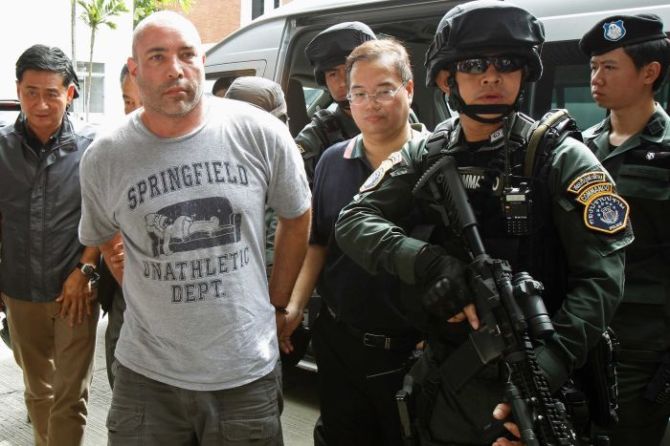 A legal document lodged by the US attorney’s office in New York alleges Joseph Manuel Hunter, also known as Frank Robinson, Jim Riker and Rambo, plotted to carry out the contract killing for $US850,000, and also attempted to import cocaine into the US.

Two of the team were arrested on Wednesday entering Liberia to allegedly carry out the contract hit, which was given to them by undercover sources for the US Drug Enforcement Agency (DEA).

Simultaneously, Hunter was also taken into custody at the Phuket Country Club by heavily armed Thai police and is expected to arrive in the United States tonight (AEST).

The US attorney’s office alleges he planned the hit and led the team of mercenaries.

Hunter made requests to the undercover sources for silenced weapons, a scoped rifle and the team was also provided with highly specialised latex masks to hide their identities.

Hunter – the central figure of the conspiracy – is a 21-year veteran of the US military who led air assault and airborne infantry squads, as well as trained snipers.

Since leaving the military in 2004 he has arranged for the “murders of multiple people”, the US attorney’s office alleges.

Nico and Paul had served in the armed forces of Germany, while Gerald was a member of Poland’s elite counter-terrorism unit. All three were snipers. Tay, whose real name is Timothy Vamvakias, is a former US Army sergeant and a military police officer who served with Hunter.

The indictment explains that this conspiracy began late last year when Hunter began recruiting members of his team. In January this year Hunter met two people in Thailand who portrayed themselves as Colombian drug dealers to whom Hunter gave his team’s resumes.

They were in fact sources for the US Drug Enforcement Agency and all their conversations on that day and at future meetings were secretly recorded.

In March, Hunter met the fake drug dealers again. He was told that apart from being security for a drug running-organisation he could expect “bonus jobs”, or contract kills.

Hunter told the DEA sources he had undertaken that sort of work before.

Authorities recorded Hunter’s conversation with his team later on the same day. He told the team what their new employers were expecting of them and that they would see “tons of cocaine and millions of dollars”.

He also said they would be doing “assassinations” and that most of the bonus work would be up-close killings because in the cities you do not get long-range shots. Hunter also divulged that he had arranged for two female real estate agents to be killed.

In April, the conspiracy moved to Mauritius where the team provided security for a real eastern European drug-trafficking organisation that had shipped over 200 kilograms of cocaine.

They also provided counter-surveillance on a weapons deal for the fake Colombian drug dealers.

In June they went to the Bahamas to provide surveillance of a massive cocaine haul being loaded onto a plane bound for the US. It was after this job they were offered a contract to kill a DEA agent and a boat captain in Liberia. He replied in an email: “They (the mercenary team) will handle both jobs they just need good tools”.

Later they would be provided with highly specialised latex masks, which can make the wearer appear from another race. 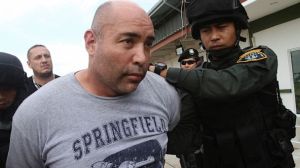 Finally, in August, Hunter and teammate Vamvakias met up with the fake Colombian dealers to discuss the details of the assassinations, which were again recorded.

Vamvakias told them the team would “have to get up close” and that if his primary weapon malfunctioned he would need the pistols to “hit it hard, hit it fast, make sure it gets done and get the f*** out of there”.

They also asked about how to get into the country without having their passports stamped and they were told they would be flown out in a private plane.

Hunter said the extraction would be “the biggest headache” rather than the “job”.

In all it would take two weeks: one week for surveillance and one week to “make it happen”, he allegedly said.

By this stage two of the team – Paul and Gerald – had backed out of the job.

Hunter said he would arrange for Vamvakias and Nico to do the job together.

Nico is recorded as saying about the “bonus jobs” that “actually for me that’s fun, I love this work”.

On Wednesday this week they arrived in Liberia to allegedly commit the planned murders for hire and were arrested and sent to the US, where they have now been charged.

Paul and Gerald, who had pulled out of the mission, were arrested in Estonia.