A woman who abducted her baby daughter and kept her from the father for 18 years avoids jail because of “unique circumstances” — and the dad’s request. 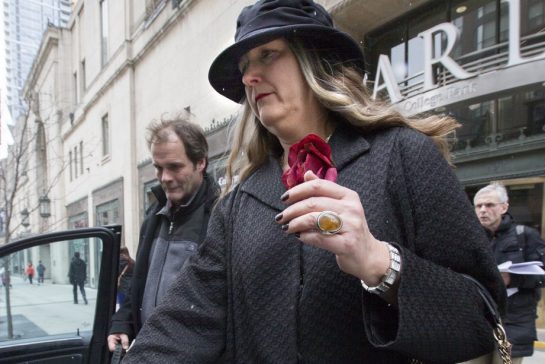 Patricia O’Byrne leaves College Park court after being sentenced to house arrest for abducting her child and keeping her away from the father for 18 years.

A woman who pleaded guilty to abducting her 20-month-old daughter and keeping her away from the girl’s father for 18 years has been sentenced to two years less a day of house arrest.

Patricia O’Byrne will serve her time, less 48 days of credit for pre-trial custody, at her home in Victoria, B.C., followed by two years’ probation.

Normally, parents abducting their children should get “real jail” to denounce their conduct and deter others, Justice Mara Greene said at College Park provincial court Tuesday.

“However, the case at bar has some unique mitigating factors,” the judge added.

“Ms O’Byrne acted in a way that she thought was in the best interest of her child. She was frantic and fearful for her child’s safety when she was not with her. These thoughts ultimately led her to abduct her child.”

Secondly, there is a clear link between the abuse she suffered as a child and the initial commission of the offence, Greene said.

“I appreciate that this does not explain why Ms O’Byrne kept (her daughter) away from her father for 18 years. At some point, the abduction became less about Ms O’Byrne’s concern for the safety of her child and more about protecting herself from detection and prosecution.”

But the judge noted that O’Byrne has pleaded guilty and taken full responsibility.

In addition, O’Byrne’s daughter and father, Joe Chisholm, wrote statements that said jailing her will only exacerbate the harm already done.

Neither father nor daughter was in court for the sentencing.

O’Byrne, 55, refused to speak to reporters as she left.

But her lawyer, Julianna Greenspan, said the former Toronto woman is grateful for the judge’s decision.

The 21-year-old daughter, who cannot be identified, is also thankful her mother is spared jail, Greenspan said.

Daughter and father are developing a relationship, Greenspan added. “There is a hope for rebuilding and moving forward.”

Crown prosecutor Michael Callaghan had sought a sentence of 15 to 18 months in jail, followed by probation. He had no comment afterward.

O’Byrne mistrusted men because of the sexual abuse she suffered as a child and physical abuse she witnessed her mother experience, the judge noted.

“She was convinced, albeit wrongly, that Mr. Chisholm was putting her daughter at risk by using male babysitters,” Greene said.

Under a May 10, 1993, settlement, the daughter was to primarily live with O’Byrne, but Chisholm was granted access. But within weeks, O’Byrne and their daughter disappeared.

Over the years, Chisholm worked tirelessly to locate his girl, registering her with Child Find. Police issued a Canada-wide warrant for O’Byrne’s arrest.

Mother and daughter lived in Ireland for a time, moving to B.C. 10 years ago. There O’Byrne worked for the government and did volunteer work.

“Ms O’Byrne appears to have led a productive life and been a wonderful mother. I hesitate to refer to her existence as pro-social, however, as she spent the past 18 years living under a false identity and continued to be in breach of a court order.”

“What is equally obvious from his statement is the extreme pain he has endured over the past 18 years, all as a result of Ms O’Byrne’s conduct.”

Chisholm said in an interview before the sentencing that, whatever the outcome, he doesn’t harbour ill feelings for O’Byrne.

“I see it as impossible to love your child and hate her parent,” he said. “I hope everyone comes out of this in the best possible way.”

In an earlier written statement for the judge, O’Byrne said she was never motivated by a desire to hurt the father or his family.

Bail for B.C. mom accused of kidnapping infant from Toronto